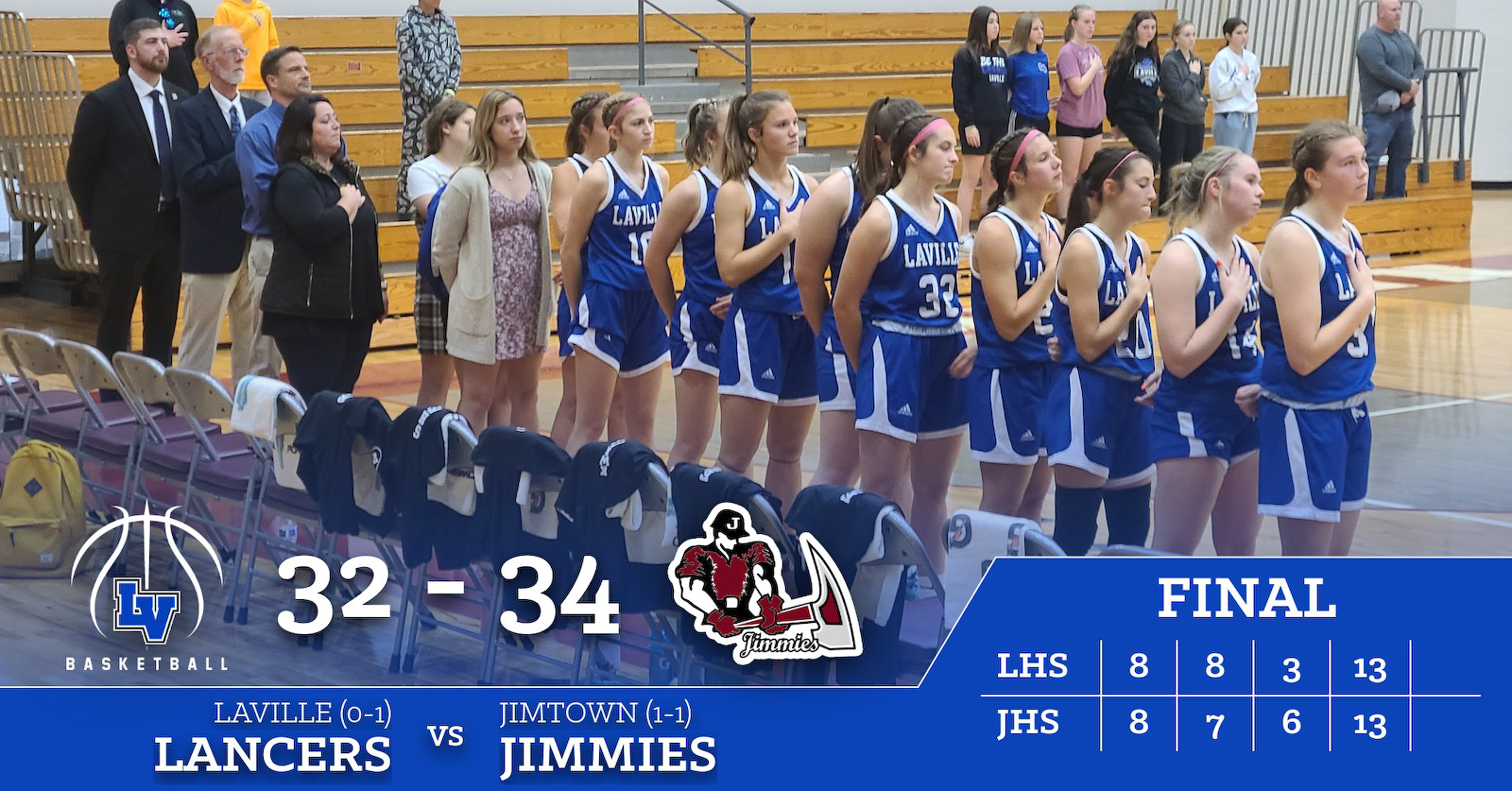 ELKHART, IN. – With the way the high school girls basketball game between LaVille and Jimtown was being played, there was no doubt it was going to be a thriller right to the very end. Neither team led by more than six points – an 8-2 first quarter lead for Jimtown – and the game was tied 13 times before the exciting finish to a 34-32 JHS victory. With Jimtown clinging to a 32-30 lead and 25.2-seconds remaining in regulation, LaVille head coach Nicholas Amor called a time out. Following the break, the Lancers worked the ball and found an open shot for Mikalah Kuskye inside the lane. The sophomore’s shot hit off the backboard. LaVille forward Jasmine Foster was crashing the weak side to gain rebounding position. As it happened, Foster was in the right place at the right time. The 5-foot-8 forward snatched the ball and went right up. The sophomore’s shot kissed off the glass and through the net to tie the score at 32-32 with 20 seconds remaining. On the ensuing inbound Jimtown was fouled. Abbey Brown stepped to the line for two free throws. Brown missed the first, but converted the second to give JHS a 33-32 lead with 13.9 seconds left. LaVille then tried a half-court pass, but the ball was long and recovered by the Jimmies. Jimtown’s Justyce Williams was fouled and sent to the charity stripe for the double bonus. She hit the first but missed the second. Lucy Sherk picked up the free throw miss and the Lancers quickly moved the ball up the floor. LaVille’s Brooke Edison found Sherk at the top of the key, but the 5-foot-10 senior was heavily defended by Brown and Sherk’s shot was deflected short of the basket as time ran out. “On the last play, we didn’t quite get into the set that I wanted us to,” explained Amor. “I also don’t think we fully understood the amount of time we had left on the clock and thought we lacked a sense of urgency. Overall we learned a lot from this first game.” Both teams went back and forth for the entire game, resulting in 20 lead changes. Jimtown opened the biggest lead of the game for either team at 8-2, but a 3-pointer by LaVille’s Mikalah Kuskye and free throws by Heaylyn Kwiatkowski tied the game at 8-all as the first quarter closed. All things considered, there were several bright spots for the Lancers. For a team that has had a short time to learn a new offense, new set plays, and defense, LHS had several opportunities to be successful “We did see some positive things offensively,” noted Amor. “We got the ball where we wanted a lot of the time. We just need to work on finishing at the basket. “The biggest thing we learned is our weakness right now is turnovers,” continued the Lancer coach. “If we force turnovers on the other team but give the ball right back to them we will continue to struggle this year. We have to get better at free throws. “Those are opportunities we can’t pass up. Overall I thought the game was a good eye-opener for us.” Williams led all scorers with 17 points. On defense, LHS picked up 13 steals, led by Kuskye with five. Foster and Edison scored five points each for LaVille. Sherk had four points, Kuskye three, and London Kwiatkowski two points. “Defensively our rotations looked pretty good,” said Amor. “We have a few things to tweak on help side and second rotations but overall we had a good defensive game.” Sherk added six rebounds for LaVille, as the Lakeville guests squeaked out a 30-29 advantage on the boards. LaVille (0-1) will travel to South Central on November 5. The junior varsity is scheduled to tip at 6 p.m., with the varsity game to follow. South Central defeated LHS 56-23 last season and has won the last four straight against LaVille. “It’s time to prepare for South Central, who is a good defensive team,” concluded Amor. “We have to be ready to come out with a little more fire than what we showed in the first couple quarters against Jimtown.” JIMTOWN 34, LAVILLE 32 At Elkhart LaVille 8 8 3 13 – 32 Jimtown 8 7 6 13 – 34 LaVille – Lily Smith 0, Heaylyn Kwiatkowski 13, Brooke Edison 5, Mikalah Kuskye 3, Lauren Edison 0, London Kwiatkowski 2, Lucy Sherk 4, Jasmine Foster 5, Quincy Blodgett 0. Totals: 10 11-23 32 Jimtown – Madison Woolwine 0, Tru Whitaker 1, Libby Dovr 0, Alexis Garrettson 6, Jystyce Williams 17, Abbey Brown 4, Natalie Butler 4, Caitlynn Track 0, Caitie Wolfe 0, Destinese Bostic 2. Totals: 9 14-32 34 3-point field goals: LaVille 1 (Kuskye), Jimtown 2 (Williams 2) Total fouls (fouled out): LaVille 20 (none), Jimtown 23 (Bostic)